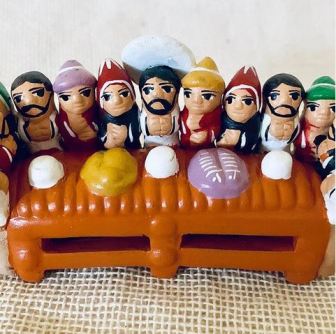 Jesus shared a final dinner – the Last Supper – with his followers before his arrest. These are precious moments. He has only a few hours before he will be arrested, tried, and crucified. So what does he talk about? Is there any hope left?

16 The disciples left, went into the city and found things just as Jesus had told them. So they prepared the Passover.

17 When evening came, Jesus arrived with the Twelve. 18 While they were reclining at the table eating, he said, “Truly I tell you, one of you will betray me—one who is eating with me.”

19 They were saddened, and one by one they said to him, “Surely you don’t mean me?”

20 “It is one of the Twelve,” he replied, “one who dips bread into the bowl with me. 21 The Son of Man will go just as it is written about him. But woe to that man who betrays the Son of Man! It would be better for him if he had not been born.”

22 While they were eating, Jesus took bread, and when he had given thanks, he broke it and gave it to his disciples, saying, “Take it; this is my body.”

23 Then he took a cup, and when he had given thanks, he gave it to them, and they all drank from it.

24 “This is my blood of the covenant, which is poured out for many,” he said to them. 25 “Truly I tell you, I will not drink again from the fruit of the vine until that day when I drink it new in the kingdom of God.”

The Passover is the celebration of God’s faithfulness to his children, Israel, in their rescue from slavery in Egypt. Every year the people of Israel celebrate this feast to commemorate the Exodus from Egypt and God’s mighty hand of protection over their families.

Jesus is called our Passover lamb in 1Corinthians 5:7. He is the embodiment of God’s rescue. Our slavery is to sin and self, and Jesus came and died to rescue us from our slavery.

He doesn’t, however, mention this truth in his Last Supper address to his followers. These are precious moments. He has only a few hours before he will be arrested. So what does he talk about?

First, he identifies that one of his closest followers will betray him. We know from John 13 that Jesus identified that Judas was the betrayer, and when Satan entered Judas, Jesus told him, “What you are about to do, do quickly.”

We see that his betrayal is part of the fulfillment of what is written about Jesus (vs. 21), and in fact, Judas’ follow through on his commitment to the religious leaders to betray Jesus is a required step toward his arrest and ultimate sacrifice.

Even in these moments in which we think perhaps this is happening to Jesus, he is Lord of all…

As Lord, Jesus then shares the institution of Communion – the Lord’s Supper – by taking the bread and wine to symbolize his body and blood. The bread is distributed to those around the table. Everyone receives the bread and then the wine, and Jesus shares that this is a new covenant he is making.

His blood will be poured out for many. They could not comprehend the magnitude of the rest of this day or the next. It is Thursday night, and by this time Friday, Jesus will be dead, coming down from the cross to be laid in Joseph’s tomb.

Even in these times in which Jesus talks of betrayal and of sacrifice, he also offers hope. “Truly I tell you, I will not drink again from the fruit of the vine until that day when I drink it new in the kingdom of God.” Verse 25 tells us that Jesus will rise to drink of the cup again. We can see Resurrection Sunday in the distance from our seat around the Last Supper table.

Take it all in. Understand the gift and sacrifice of God for you. Worship Jesus the Lord of all.

This site uses Akismet to reduce spam. Learn how your comment data is processed.