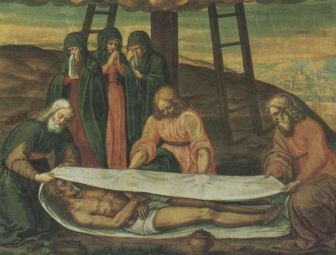 At personal cost and at the risk of extreme peer pressure, two men organized the burial of Jesus in the tomb of Joseph. They wrapped him in linen. They placed him in the tomb.
They rolled the stone against the entrance. Against the pressure of their community…

42 It was Preparation Day (that is, the day before the Sabbath). So as evening approached, 43 Joseph of Arimathea, a prominent member of the Council, who was himself waiting for the kingdom of God, went boldly to Pilate and asked for Jesus’ body.

44 Pilate was surprised to hear that he was already dead. Summoning the centurion, he asked him if Jesus had already died. 45 When he learned from the centurion that it was so, he gave the body to Joseph.

46 So Joseph bought some linen cloth, took down the body, wrapped it in the linen, and placed it in a tomb cut out of rock. Then he rolled a stone against the entrance of the tomb. 47 Mary Magdalene and Mary the mother of Joseph saw where he was laid.
Mark 15:42-47

There is a remnant story in the crucifixion of Jesus. There is an underlying theme in the Scripture of remnants. There are always remnants. In the Bible, the remnant is what is left after calamity or catastrophe (whether invasion or disaster). The remnant is set aside to make it through and carry the truth or the torch for the sake of God’s plan and purpose.

In the council of the leaders and elders in Jerusalem, there was a remnant. It was made up of Joseph of Arimathea and Nicodemus. Although Nicodemus isn’t mentioned by Mark, we know from the other gospels that he was involved in the burial of Jesus. They wanted to honour him with a proper burial. They were not in favour of his crucifixion.

And so, at personal cost and at the risk of extreme peer pressure, these two men organized the burial of Jesus in the tomb of Joseph.

They wrapped him in linen.

They placed him in the tomb.

They rolled the stone against the entrance.

It must have taken courage to go against the force of their peers in power. They stood up for what they believed in. They represented the remnant seeds of true allegiance to God in contrast to the self-serving actions of the other leaders, who were threatened by Jesus’ presence and purpose.

How about you? Would you stand up as a remnant in your community when the tide turns against truth and grace and God’s purpose? It will take courage. It will take perseverance. It will taking counting the personal cost. Just like Joseph and Nicodemus…

This entry was posted in Mark and tagged Christianity, Faithfulness, Honour, Marc Kinna, peer pressure, Remnant, standing up for truth. Bookmark the permalink.

This site uses Akismet to reduce spam. Learn how your comment data is processed.